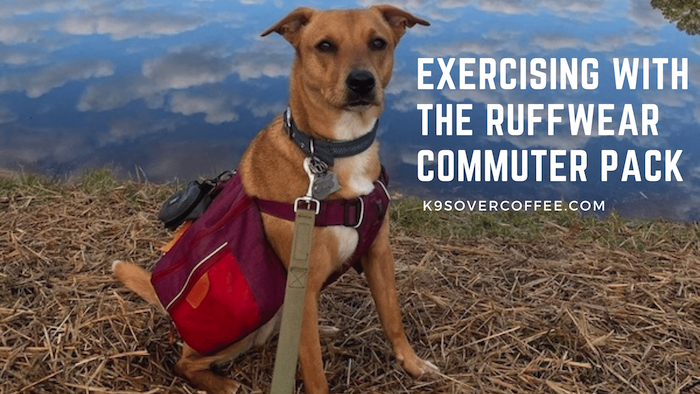 I love exercising my dog Wally with the Ruffwear Commuter Pack!

He’s been going on backpack walks almost daily since I adopted him on January 30 in 2019.

That’s lots of increased exercise for my little bundle of energy!

As a matter of fact, when I decided to become a foster failure and adopt Wally myself, the first thing we did that day was take a trip to Phydeaux in Cary, NC.

On this particular day, I bought Wally a Ruffwear Commuter Pack.

I could have ordered one on Amazon of course, but I didn’t want to wait to get it in the mail.

Instead, I wanted to get one that very evening and start using it right away. I had been using doggie backpacks with my previous dogs Missy & Buzz as a means of increased exercise for years and absolutely swear by them.

Update 2021: Unfortunately, the Ruffwear Commuter Pack was discontinued. That’s a bummer, but you may be able to score it for 20% off here.

Disclaimer: Some of the links in this blog post are Amazon associate links. This means that if you click on an affiliate link and buy certain items, I will receive a small commission to keep this blog going. The price is not affected by this and remains the same for you.

Features Of The Ruffwear Commuter Pack

The Ruffwear Commuter Pack is a great, cool looking everyday rucksack for dogs.

It can be worn on casual urban outings as well as on more demanding trail hikes.

The following are its features:

Wally weights 40lbs and has the Larkspur Purple version of the Ruffwear Commuter Pack in size small.

Unfortunately, the Ruffwear Commuter Pack is not waterproof. Not even close! Ours got soaked a few times when we were surprised by rain on our hikes.

Every time that happened, the entire contents of the backpack pockets got soaked as well.

Benefits Of Backpacks For Dogs

Why do I swear by doggie backpacks? Because they’re great for:

If you have a dog who’s hard to manage on leash, I implore you to try a doggie backpack. Seriously, you’ll thank me later.

You can also walk your dog on a head collar while he’s carrying the backpack for ultimate control.

Common head collar brands here in the US are the Gentle Leader and the Halti.

I’ve recommended dog backpacks to several of my dog walking clients over the years who were struggling with pulling on leash and overweight dogs. I particularly remember this one client of mine who was an absolute nightmare on leash.

He was American PitBull Terrier DoeBoy. DoeBoy had zero leash manners, and literally pulled me all.over.the.place. I distinctly remember cursing throughout that first walk I took him on.

Believe me that this was the only time this happened with me on the other end of the leash though. That’s because I contacted the owner right after that awful walk and asked them to please let me walk their pup with a backpack. Otherwise I wouldn’t be able to walk him anymore.

Since they were open to it, I brought Missy’s old backpack along for the next scheduled walk. Lo and behold, DoeBoy did a 180 on leash and ended up being very manageable on walks as long as he wore the backpack.

It turned out that he was severely under exercised and needed a structured outlet for his energy.

The backpack was perfect for DoeBoy, and is my number one exercise tool for anyone who complains about their dog being unmanageable.

When Can A Dog Start Carrying A Weighted Backpack?

Dogs can start carrying weighted backpacks when they’re about 8 to 9 months old. It’s not recommended to add a weighted backpack to a younger puppy out of concern for their growing joints and potentially damaging them.

However, it’s totally fine to introduce the concept of an empty backpack to a younger puppy. You can simply put the empty backpack on her to get her used to the feeling of carrying something on her back.

Feel free to double-check with your vet if you’re unsure if your puppy is strong enough at 8 or 9 months of age. That’s exactly what I did before having Missy & Buzz carry their weighted backpacks. My vet at the time gave me the ok for the pups to carry their packs at 8 months of age.

That said, adult dogs should never carry more than 25% of their own bodyweight in backpack weight. Wally weighs 40 lb and could carry up to 10 lb in his backpack.

He currently carries 2 cans of cranberry jelly, several rolls of poop bags, and some first aid items like bandaids, tissues, Benadryl, and an antibiotic ointment.

When we go for hikes, I switch out the cans for water bottles and hook a collapsible water dish to the V ring.

Where Can You Buy A Ruffwear Commuter Pack For Your Pup?

You can buy the Ruffwear Commuter Pack on Amazon and from any well stocked independently owned pet retailer.

Oddly enough, I didn’t see the Commuter pack on Ruffwear.com – they currently only sell the Approach Pack and the Palisades Pack on their website.

Big fat FYI: I saw that the Commuter Pack is currently on sale on Amazon for $73.41!! That’s a steep discount compared to its regular price of $99.95 (I paid the full price when I bought it for Wally in February).

Exercising My Dog With The Ruffwear Commuter Pack: Bottom Line

I recommend the Ruffwear Commuter Pack.

It’s a fun looking, sturdy dog backpack with ample room for water bottles and toys (or cans of cranberry jelly, haha) that is guaranteed to turn heads when your pup is wearing it!

Reviewing Ruffwear’s Front Range vs Load Up Harness – Which One is Better?

Leave your comments or questions in the comment section below!