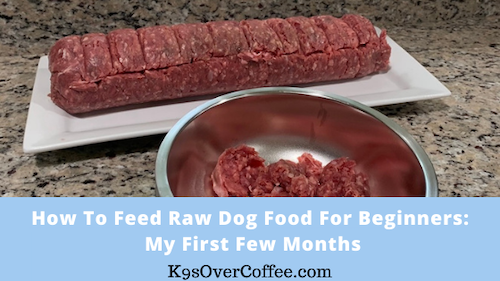 Raw Dog Food For Beginners: I can’t believe it’s only been a few months since I began feeding my pups raw dog food.

That’s because the raw diet has already become such an integral part of our daily lives!

However, there’s definitely a learning curve, and one thing I’ve learned is that it’s easiest to order pre-made raw dog food. At least for the first few months.

I’ve been ordering pre-made raw dog food from Darwin’s Natural Pet and Raw Paws Pet Food. Both make raw feeding super easy because all you have to do is thaw, measure, and serve.

Darwin’s is located in Seattle, Washington, but ships their raw dog (& cat) food throughout the entire continental US via UPS. Every shipment has arrived safely, on time, and in great condition.

They use dry ice to keep the food frozen, and it has worked phenomenally. Even on those crazy summer days when the temperature has been in the high 90s/low 100s (30-40 C) here in NC.

Their raw dog food comes pre-packaged in 2 pound packages consisting of four 8 oz pouches. Each of those pouches can be opened easily with their easy-peel opening, making measuring our pups’ portions a breeze!

Side Note: Both Missy & Buzz get fed twice per day. Buzz eats a little over 1 lb per meal, and Missy about 7.5 oz per meal.

Raw Paws Pet Food is located in Indianapolis, Indiana, and also ships throughout the entire US.

Their shipments go out via FedEx Home and are also kept frozen with dry ice. We received their first package on a 95 F (35 C) day and the contents arrived in impeccable shape/frozen consistency.

I ordered 5 lb of different protein sources (duck, lamb, chicken, beef) which came pre-packaged in long tubes (except for the lamb which came in a plastic bag). They took longer to thaw than Darwin’s packages which makes sense because of the 3 lb difference in volume.

Once opened, the contents of the tube needed to be transferred into a storage container, which we have a large variety of, so that was easy enough to do!

Both companies offer incentives for first time raw customers. Darwin’s “Trial Offer” consists of 10 lb of raw food for $14.95, which I began with before ordering larger amounts.

Update 2020: You can now save 15% on your Raw Paws Pet Food order with my affiliate discount code K9Savings. Simply enter it at checkout.

Knowing How Much Raw To Feed

The formula to follow to figure out how much raw dog food your dog needs per day is a very simple one.

Adult dogs should be fed between 2-4% of their ideal body weight. Divide that into however many meals your feed your pup(s) per day, and you’re off to a good start.

It has taken a combination of following that formula, the raw food company’s feeding guidelines and observing my pups’ body condition in order to come up with the correct amount of food to feed.

I started with 1 lb per meal for Buzz, and 9 oz per meal for Missy. 1 lb wasn’t enough for my active big boy, and once his ribs were noticeable when he was lying down, I adjusted his allowance per meal. Now he gets about 1.15 lb per meal.

Missy was starting to fill out a little more, which was the perfect indicator to lower her per meal allowance to 7.5 oz. Now their bodies look perfect, featuring nice waistlines and glowing coats!

Based on the exact amount of food I mentioned, you probably already guessed that I’m using a food scale to measure out Missy’s & Buzz’s meat allowance.

I began measuring the food with a manual kitchen scale. Just recently, I got my hands on a digital food scale I’ve been using ever since. It’s a Weight Watchers scale that measures in pounds and grams, but you can also find digital scales that measure in oz and grams on Amazon. It’s a very convenient raw dog feeding tool I highly recommend.

It’s important to understand how to thaw frozen dog food in order to keep all of its nutrients intact.

Basically, you can either take it out of the freezer and let it thaw in the fridge. That takes anywhere between 1-2 days, depending on the volume.

The other method is to put the frozen dog food in a bowl with cold water and let it thaw that way.

I have noticed that this method is much quicker than the fridge method.

But it only works for smaller amounts of frozen raw. For example, Darwin’s pouches and Raw Paws’ 1 lb tubes.

NEVER USE THE MICROWAVE TO THAW FROZEN RAW DOG FOOD! It will kill the nutrients!

Raw Dog Food With Veggies Or Without?

Whether or not to include veggies & fruit when feeding a raw dog diet seems to be the question of the century.

I personally like the idea of adding some veggies to the pups’ meals because a) prey in the wild would have contained veggies and b) the pups really enjoy snacking on some veggies (& fruit)!

Update 2020: I’ve learned a lot about raw dog food since I first began feeding it in 2015 and I got my raw dog food nutrition specialist certification in early 2020.

It’s recommended to add veggies to close nutritional holes unless you feed whole prey with EVERYTHING. Including heads and brains, eyes, fur, fins, feathers, etc.

Raw Paws Pet Food follows what is known as the “80/10/10” rule, meaning their complete meals consist of 80% meat, 10% bone and 10% secreting organs. They also offer a few options with veggies.

I found out about several dehydrated veggie mixes that are made to be mixed with raw or cooked meat. For example, Dr. Harvey’s Grain-Free Veg-to-Bowl, Sojos’ Grain-Free Pre-Mix, and The Honest Kitchen’s Base-Mix.

Do you feed raw dog food? As always, we’d love to hear from you in our comment section!

What Does Balanced Raw Dog Food Consist Of?

3 Best Raw Dog Foods In The US That I Recommend

Vegetables In Raw Dog Food: Yes Or No?

Join the K9sOverCoffee Community to stay in the loop about recipes, reviews, and giveawys! Get your free raw dog food recipe as soon as you sign up!
(Visited 107 times, 1 visits today)