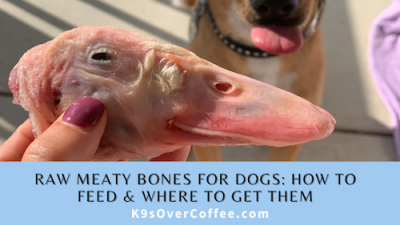 I first learned about raw meaty bones for dogs back in 2014. That was when my kibble-fed Boxer mix Missy was being treated for thyroid cancer and I was doing research on raw dog food.

Fast forward 5+ years and by now I’ve fed a ton of different raw meaty bones. Everything from chicken feet to rabbit heads and duck frames.

That said, I know a thing or two about raw meaty bones for dogs! 🦃

If you want to add veggies to your dog’s raw diet, feed 70% muscle meat and 10% veggies.

Raw meaty bones can and will be eaten entirely, which is normal and nothing to worry about. A dog’s stomach is much more acidic than our human’s. Therefore, it’s designed to break down raw cuts of meat including raw meaty bones.

Although raw meaty bones only make up 10% of the overall raw diet, they’re an integral part of it. That’s because they’re rich in calcium, phosphorus and trace minerals. Those are essential to a dog’s skeletal health. Without the bone content, a raw diet would be nutritiously incomplete and considered unbalanced.

I have to stress the importance of never feeding your dog cooked bones!

They should NEVER be fed because the cooking process changes their structure and makes them brittle. That said, they can splinter and cause choking as well as lots of internal damage to a dog’s body.

Raw meaty bones on the other hand are soft and pliable.

The only time where you can cook bones for your dog is when you’re making homemade bone broth.

That said, raw meaty bones should always be larger than a dog’s mouth. That’s especially important when your dog is a gulper to ensure that the bone gets chewed and not just swallowed whole.

Raw Meaty Bones That Are Safe To Feed Small Dogs

Small dogs should be fed smaller raw meaty bones that are appropriate in size to their mouths.

They can be fed chicken wings/necks/feet, duck feet/necks, and very small beef oxtails.

Dogs suffering from tooth decay or those that might have had the majority of their teeth pulled should not be offered raw meaty bones for obvious reasons – they can’t chew them.

But that doesn’t mean that those dogs have to miss out on the health benefits of bone content. You can buy a meat/bone grinder and grind your own bones and then add them to your pup’s raw diet.

If no teeth are left you’ll have to grind the entirety of the meal, to include the muscle meat and organs.

Another option is to buy pre-made raw meals from companies such as Darwin’s Natural Pet, Raw Paws Pet Food, and Raw Feeding Miami.

They offer raw, balanced meals that have been put together following the 80/10/5/5 raw feeding formula and that have been completely ground. Some brands like Darwin’s add veggies and fruit to their formulas.

Be aware that those meals are more expensive than purchasing the individual components of the raw diet and putting them together yourself. You’re paying for the convenience factor!

That said, every now and then I buy pre-made raw as well, but usually only when I can get a good deal on it. That’s why I recommend browsing Raw Feeding Miami’s Monthly Specials section and Raw Paws Pet Food Sales section on a regular basis.

My current pup Wally is a 38 lb Feist mix and eats duck heads/necks/wings & feet, turkey wings and necks, as well as chunked rabbit. The only raw meaty bone he won’t eat are rabbit heads. Bummer!

There are a few raw meaty bones I don’t feed him like a) duck frames (they’re a bit too large for him), b) quails and c) any raw meaty chicken bones. The reason why he can’t have quails and chicken is because he’s allergic to both.

I don’t feed weight bearing bones from large hooved grazing animals such as beef and bison (knuckle and femur bones). Neither should you! They should be avoided because of their density, which can fracture teeth.

It makes sense when you think about it – they have to hold up hundreds of pounds of animal weight after all! In comparison, poultry bones are considerably less dense because they only hold up a few pounds of animal.

I also don’t feed deer legs, but I do let Wally rip the meat off of them. I can do this because he’s OK with leaving the bone alone and he accepts me taking it away when he’s done with the meat. It’s important to know your dog’s chewing habits!

Also don’t feed your dog smoked beef bones! I made the huge mistake of offering Buzz a large, smoked beef bone from the grocery store for Christmas back in 2014. This was before I started feeding raw dog food and assumed that all recreational bones for dogs were safe.

I couldn’t have been more wrong as it resulted in Buzz fracturing a molar that had to be removed in its entirety. It was a painful and expensive experience I don’t wish on anyone else.

Where To Get Raw Meaty Bones For Dogs

You can get raw meaty bones from dog food retailers like Raw Feeding Miami, Raw Paws Pet Food, and My Pet Carnivore. You can also find some at your local grocery store, Walmart, or farm.

It’ll depend a little on what your particular grocery stores and Walmart carry, but I’ve been able to find the following at my local ones:

Local farms can be particular great for finding bone-in rabbit cuts. I don’t know of any local rabbit farms near me, but I found one in TN who sells online (including on Ebay) and ships nationwide:

J & A Farms carry a wide variety of rabbit – coarse & fine ground, with and without fur, as well as whole prey.

I’ve already mentioned their calcium, phosphorus and trace mineral content which are all important for a healthy skeleton.

But raw meaty bones also act as a natural tooth brush by scraping off food residue and therefore helping prevent plaque buildup. The latter can cause a plethora of diseases as the bacteria enter the bloodstream and travel to vital organs.

Gnawing on the bone is also a wonderful means of exercising a dog’s jaws and providing mental stimulation. It’s OK to offer raw meaty bones that are still partially frozen for a longer lasting workout, so to speak.

Raw meaty bones are an integral part of balanced raw dog food. They’re safe to feed to your dog as long as a few guidelines are observed.

Remember to feed the appropriate size raw meaty bone. You’ll also want to avoid weight bearing ones from large grazing animals as well as smoked ones. Your dog’s teeth will thank you!

Do you feed raw meaty bones? As always, we’d love to hear from you in our comment section!

How to safely feed your dog raw meaty bones

Do chicken bones for dogs scare you?

How to feed your dog wild, raw venison

Homemade bone broth recipe for you and your dog

Join the K9sOverCoffee Community to stay in the loop about recipes, reviews, fitness tips & giveaways! Get your free raw dog food recipe as soon as you sign up!
(Visited 2,654 times, 2 visits today)